“What’s up everybody? This is Sam from EarthFIT. Today I’m going to do a video – three exercises you could do to improve that overhead shoulder press. You’d either do these exercises in a circuit as your own workout or you do them for a warmup on shoulder press day. First thing we’re going to do is (1) Internal, External Rotations with a band and when you set up the band, you can do it on a rack or if you’re at home you could do it on your fridge. Whatever you could find to wrap the band around. You want it to be about where your elbow is… So simply gonna pull the band out, keeping this elbow tucked in to your side. If you don’t have the mobility to do that, you could grab a towel and keep it on your side, keeping that towel there. 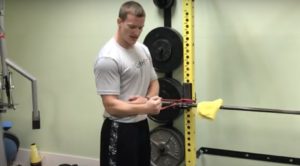 Okay. That’s the external rotation and then the internal rotation. Same thing. You want to keep your elbow in nice and tight, bringing that across just like so. And then you would switch to make sure you hit both sides. Now we’re doing the external rotation and the left hand would be internal rotation. On the right you’d do about six to eight reps. If you’re just doing it for a warmup about three sets, um, obviously if you’re doing it for a workout, you could do increase the volume on that. Next exercise we’re gonna do, so we’re working on retracting and depressing our shoulders. A lot of times people are rounded forward from being on their cell phones or driving in their car, and this kind of limits the range of motion on a shoulder press. So a good way to get out of that would be this exercise here, which is called a (2) Prone Cobra.

So you’re going to stick both arms out as if you were flying if you’re superman, you’re going to stick your thumbs up and you’re going to bring your shoulders back and as you’re bringing them back, you also want to bring those shoulder blades back down. You can lift your head and the key to this movement is to create constant tension by trying to bring those wrists together. Notice I’m keeping my thumbs up the entire time. This can be very difficult depending on how you squeeze. For warm up, you want to do about three sets of 30 seconds. If you’re doing it on your own workout, you’d want to do about 6 sets of 30 seconds or three minutes total. So if you could do, you know 1 set or 3 sets of one minute each, you could do that as well. Then the final thing we’re going to do go over is a (3) Bottoms Up Kettlebell Press. 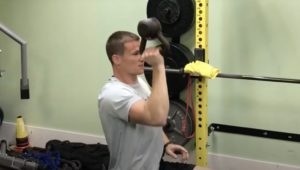 What this is going to help you do is stabilize the shoulder in your press. Get a kettlebell. I have a light one here. Typically you want something a little heavier. You’re going to get up like this and you’re going to press straight up imagining the elbows in line with your ear as you press up and then back down just like you’d be doing in a shoulder press. Now, what’s unique about these exercises? If you’re moving your shoulders around, it’s not stable. The kettlebell is just going to fall over. So you want to use something that’s heavy enough to where it’s challenging but if you’re on your shoulder press day, you do not want to, you know, tire yourself out. So again, you could do 3 sets of that. 6-8 reps make sure you’re switching sides. You’re pressing the same side as that leg that’s down. In this case, it’s my left. That’s the bottom up kettle press. So to recap, those are 3 exercises you could do. You can do them in circuit if you want to do your own workout. You know obviously load the weight more on the kettlebell. Really hold that attention on the Prone Cobra and increase the reps. They’re on that for a simple warm up. You can do about 3 sets of that.” 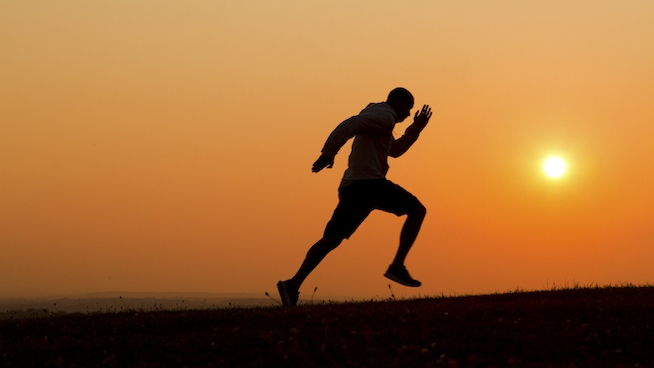 12 Steps to Getting Lean while in Quarantine